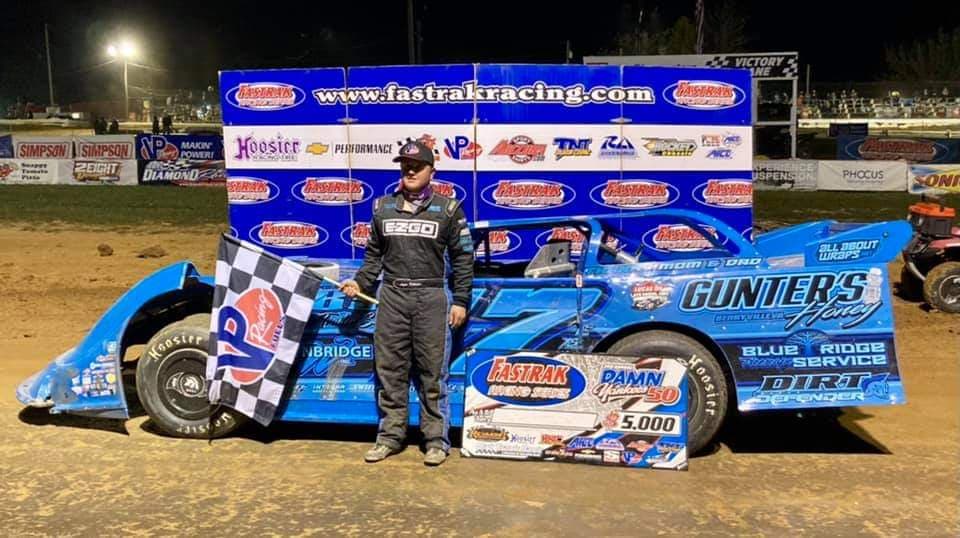 Richmond, Kentucky - The FASTRAK Racing Series powered by Chevrolet Performance after almost a 1 1/2 month hiatus returned back to the Richmond Raceway KY in Kentucky for the $5000 to win 3rd Annual Damn Yankees 50.

Twenty-Eight competitors from New York to Georgia made the trip to the "Beast of the East" for what has become the richest pro late model race on dirt annually in the state of Kentucky thanks to track owners Bill & Stacy Lupinos.

Logan Roberson Racing has had years of success in the FASTRAK brand winning the 2018 World Championship, 2019 World Challenge and more. Recently this year he has tried his hand in the exciting world of super late models with some victories along the way. Roberson would capture his 4th consecutive PLM victory since returning back to the 604 Chevrolet performance based series & third victory of his FASTRAK resume dominating the $5000 contest Saturday evening.

It wasn't easy though for Roberson of Waynesboro, VA who led all 50 laps of Saturday's Damn Yankees 50 at Richmond, he really had to show some special techniques and driving skills to overcome several lap traffic obstacles that could of been costly for the victory. This victory for Roberson made it now five different winners in five events as this crazy shortened 2020 season nears its conclusion.

Roberson exclaimed in post race interview, "When we got to a couple laps to go, my dad started signaling me that he was on me and them lapped cars, oh my god, they didn't know where they was going and I was stuck in a pickle and I heard him on the outside and he was beating the wall down," Roberson said. "My dad was just telling me to take up the whole racetrack and hopefully it would pay off for us and luckily enough, I'm blessed enough and it held off and we got lucky."

17 Roberson's victory was the third of his career, with again the FASTRAK Racing Series and as the series prepares the the 2020 FASTRAK World Challenge next weekend he was the champion of that prestigious event in 2019 also.

The NEXT event scheduled for the FASTRAK Racing Series powered by Chevrolet Performance is this coming up weekend October 2-3 with our 2020 FASTRAK World Challenge paying $5000 to win at the Toccoa Raceway in Georgia.