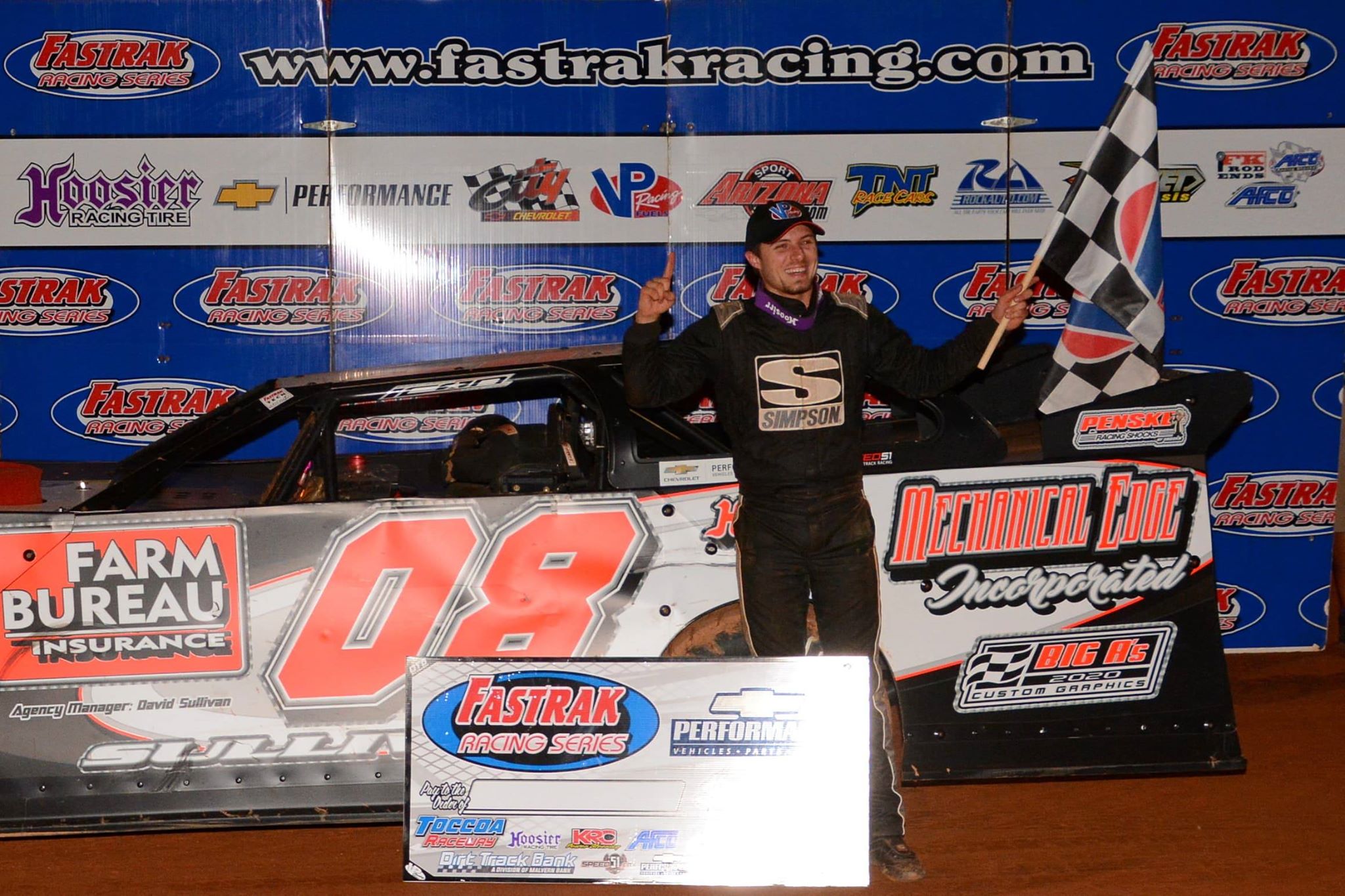 Toccoa, Georgia - The last time the FASTRAK Racing Series presented by Chevrolet Performance was in action was on record 220 days ago at Sylvania, GA at Screven Motorsports Complex. The start of the 17th consecutive season was put to halt like everything else in our Country on March 12th due to the coronavirus pandemic. This also delayed things for 78 days until the series finally allowed the green light to begin at Toccoa Raceway on Saturday to officially open with celebration Toccoa Raceway’s 65th anniversary season at the 5/16th mile located off Hwy 17 in Georgia. The $2,000 to win event though plagued briefly by weather to force a 4-hour delay before starting would successfully be completed in front of a packed house still practicing “social distancing” to see #08 Layton Sullivan claim his first career FASTRAK touring win with a last lap pass.

The word redemption but describes this victory for Sullivan’s Toccoa win. Flashback to June 2019 at the USA 100 at Virginia Motor Speedway while leading coming to the checkered flag blew a tire exiting turn four depressingly giving the win to 2019 FASTRAK touring champion #00 Carson Ferguson. Sullivan was able to get around local favorite #418 David McCoy who was mired by lap traffic for a last corner pass to etch his name in the record books to open the season to leave him a little speechless.

The race seen its share of single car incidents along the way with issues for Carson Ferguson, #14 Sylvan Schuette, #5 Colby Quick during the 40 lap contest. Lap 6 #55 Benji Hicks would cause “the big one” of the race after slamming head-on into the sending his car flying through the air in a full revolution being collided hard into by #7a Corey Almond, #01 Matt Glanden, #18 Greg Parton and #88 Ricky Smith all getting collected. No drivers we’re injured but several competitors were done for the evening.

As the race approached the 2am ET hour the battle would ensue between #418 David McCoy who is the best as they come which was looking like another successful conquer for FASTRAK at Toccoa however lap traffic was in the midst. With ten laps to go Sullivan was quickly able to run back down McCoy but would also have to wiggle and giggle through back markers to succeed to victory. On the last lap with lap car #01 Matt Glanden holding his line at best to try all he can to salvage to a finish would be tag teamed by McCoy & Sullivan in a three-wide white flag that brought the fans to a roaring crescendo. Sullivan was able to sneak a slider on McCoy using the lap car as a pick to get around four to pull the upset move top secure his only second career win and inaugural FASTRAK touring accomplishment.

Second place finisher McCoy was in good spirits to congratulate and acknowledge Sullivan on his victory with a hug and hand shake of respect, however was a little “hot” with the thoughts of the lap traffic causing the outcome of the finish in the end. #2 Frankie Beard who last claimed his one and only FASTRAK touring win in (2013) at dormant Gordon Park Speedway would bring the (JCR) Jessica Cornett Racing entry to a 3rd place podium. Last years winner #55l Matt Long in his Long Brothers Special Rocket would settle for a 4th place finish and 2nd place points finisher of last season #22 Nick Schlager would round out the top five at the checkers.

Tentatively, next on the schedule will be the return of the FASTRAK Racing Series powered by Chevrolet Performance back to "The Redclay Carolina Bullring" Friendship Speedway off I-77 in Elkin, NC on Saturday, July 11th for a $2,000 to win contest. Further details & information will be posted soon. As we continue to monitor the following of guidelines of the COVID19 impact if anything changes we will inform you immediately of any changes necessary. The last time the series visited Elkin, NC was May 2019, where #32 Michael Brown & defending champion #00 Ferguson claimed their career first victories.