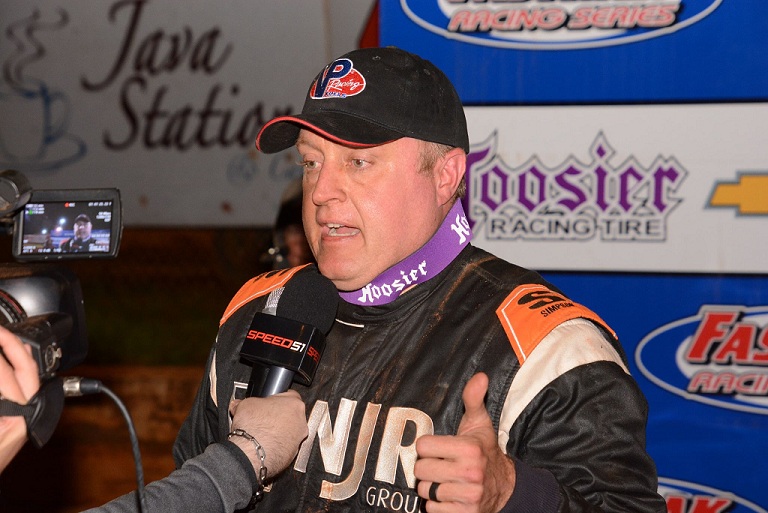 Toccoa, Georgia – The competitors of the FASTRAK Racing Series powered by Chevrolet Performance returned back to the "high banks" of the Toccoa Raceway in Georgia for the 6th edition of the FASTRAK World Challenge paying $5000 to win on a crisp Fall evening in October.

The event seen drivers flock to the longest operating dirt facility in the “Peach State” for the 6th event and the currently scheduled finale for the 16th consecutive season of racing for the FASTRAK brand. The event would greet the 6th different winner on the series to with #55 Matt Long Racing claiming his first FASTRAK World Challenge and biggest payday in his career so far $5 Grand.

Matt Long would hold off the likes of #97 Cody Overton, #20 David McCoy and many others that were out of contention following “the big one” with 9 laps to go in the 50 lap feature. Other contenders like #2 Frankie Beard, #14 Sylvan Schuette and the June Toccoa winner #08 Layton Sullivan we’re caught up in a incident which eliminated there chance of victory after Long was trying to negotiate by lapped traffic clipped the #54 Justin Wofford causing a road block.

Long would prevail after the decision was made the caution was on the #54 Wofford a secondary incident after the yellow for the others and even after being on his side from the accident Overton was able to continue but felt his tire choice before the race cost him the opportunity for his FASTRAK national touring victory.

The win would be the 5th career FASTRAK touring win for Long but obviously the biggest purse event so far in Long’s Pro Late Models. Long also joins Layton Sullivan, Justin Hudspeth, Henry Hornsby, Brent Trimble & Logan Roberson was winners of FASTRAK events this competitive shortened season. Overton again would settle for second on the podium as local driver #20 David McCoy would take 3rd place with Hudspeth & Hornsby rounding out the top 5 at the checkered flag.