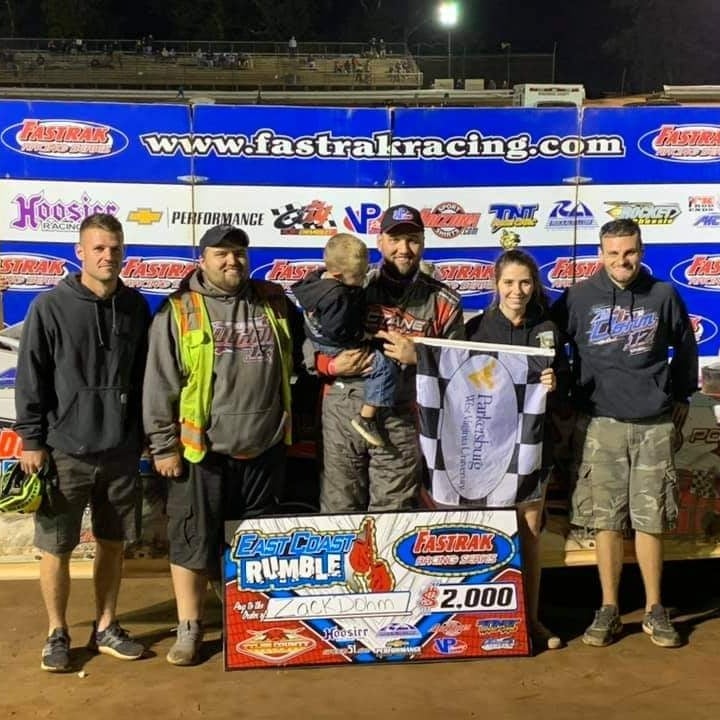 Middlebourne, West Virginia - After being plagued with the weather delays and the continuation of the devastating apocalypse in the motorsports industry. The competitors of the FASTRAK Racing Series powered by Chevrolet Performance were excited to continue its 18th consecutive season back with on track action since May 15th as being part annually of Carl Short's 53rd Annual Hillbilly Hundred Weekend at the Tyler County Speedway located at the magnificent fairgrounds located in Middlebourne, West Virginia to celebrate Labor Day weekend with the opening Round of the East Coast Rumble, a mini series within the national points held every year with the champion receiving a World Heavyweight Championship Belt.

The Dohm name is synonymous around this area for decades Zack Dohm continued the winning legacy taking the checkered flag in only his 2nd FASTRAK national tour win since September 2020 winning the Dam Yankees 50 at Richmond Raceway in Kentucky getting the $2,000 payday in his quest for the belt. Dohm was able to hold off the likes of defending FASTRAK East Coast Rumble champion #32 Brent Trimble and #57 Kyle Thomas another racer from the area with numerous years of success with victories and championships under the FASTRAK banner too. The race was plagued with only one yellow flag in the 30 lap feature in front a spectacular crowd for a Friday evening at The Bullring to kickoff the opening festivities.

Zack Dohm was really excited about this win, “I love Richmond and crates but I love FASTRAK and Tyler County, believe it or not I haven’t won a race here in close to eight years. I have to say this one is very special for so many reasons. I want to say something about the young kid Luke Hyre keep an eye on that kid he’s fast and I really had to race him hard in the heat race to keep him behind me, he raced me clean. The Cross Lanes native also commented on what it means driving the famed #6T Schwartz chassis his father Tim Dohm is so well known for in closing. “They love that car and my Dad here he got the nickname “Show-Stoppa”, I’ve won some super late models in the #6T but not the crates, we’re gonna throw them all for a loop Sunday I guess, Dad is going to be in my car #17 and I am going to try to get a provisional in the Hillbilly 50 Saturday in the steel block race to try and make the field on Sunday night too, I want to win that championship belt on Sunday. I saw that signing in and it’s pretty bad ass not just a trophy.

Brent Trimble Racing  was the sweeper in 2019 of the East Coast Rumble at the Hillbilly Hundred weekend at Tyler County, showed great strides and effort to try and get around Dohm but would fall short by the caution only one of the race after halfway when #44 Lucas McDonald spun in turn two. Lastly on the restart for a few laps he was able to get alongside but then had to hold off Thomas and Hyre for the rest of the way to settle for a second place. “We was good I need to make a few adjustments, we had a shot but Dohm was stronger and I knew he would be competitive he raced me clean I respect that. Trimble said in closing how good it was to return to the track for a FASTRAK touring event again, “It’s good to go again it’s tough going week to week let’s do what we can to support the series until winter and prepare for next year.”

Third place was Kyle Thomas who felt very happy with the finish and is ready to race all weekend at the Hillbilly Hundred at Tyler County Speedway in three different racing classes, FASTRAK pro late models, DIRTcar open wheel modified and steel block late models. “I got to thank first the Hyre’s for letting us drive this car tonight, we was all over Trimble for second we did all we could we’ll try tomorrow for the win and Sunday. The event was furious at one point with four to five wide racing around this place takes skill, it was very fun just not in the cards to get the win.”

The NEXT race for the FASTRAK Racing Series powered by Chevrolet Performance will be Sunday evening with the finale of the 2021 East Coast Rumble in the $2,000 to win “Brown Jug 40” co-headlined with the ever-popular Lucas Oil Late Model Dirt Series $30,000 to win super late models show September 5th. There is an option presented to all FASTRAK competitors too also race in Saturday night’s steel block late model “Hillbilly 50” paying $5,000 to win, but no touring points will be accumulated. This is a points optional race for this weekend’s mini-series to get the championship belt.

Stay tuned to our FASTRAK social media and website for details on the upcoming events next for the series coming to a track near you as we roar back into our 2021 season of racing at a track near you.