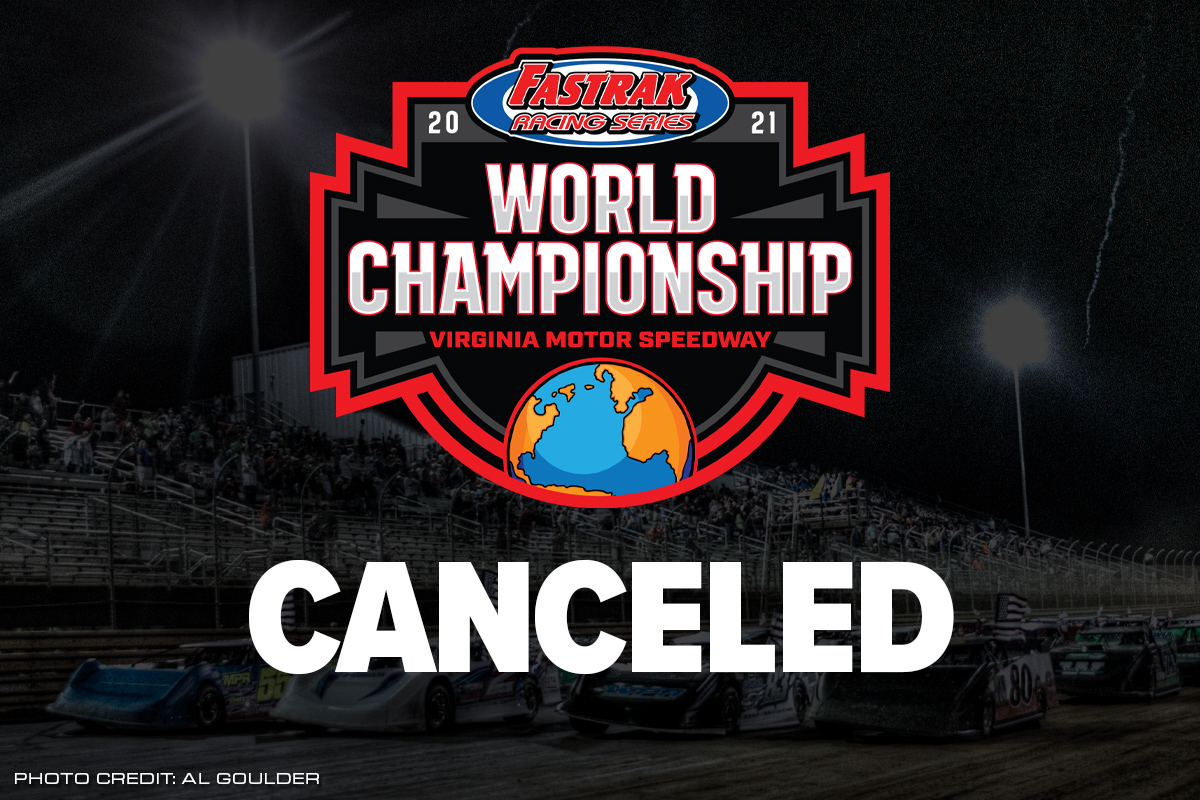 Jamaica, Virginia – With Hoosier's continued tire shortages and after exhausting all avenues available to get enough FT200 and FT400 tires to cover the number of cars expected to compete in the 2021 FASTRAK World Championship two-day event, officials at Virginia Motor Speedway and FASTRAK Racing have made the difficult decision to cancel the event for 2021.

"I do appreciate VMS working with us during the struggle with tires. The World Championship is our biggest profit event of the entire season, and as badly as we hate to cancel it, what choice do we really have?  Unfortunately, FT90's are not scheduled to be produced until October, so that doesn't do us much good for a World Championship this year. That being the case, we decided the thing to do is keep the tires they were making for us in inventory so they could be cured well and have tires to start next season with," commented FASTRAK Owner/Founder Stan Lester.

Lester added, "I know people will suggest that we go to open tire. Well, that's a little hard to do since there is no compatible tire to the FT200, plus making every competitor have every tire compound of every crate spec tire would be a ridiculous amount of money and not all crate teams can afford that. It's an impossible situation to be in, but we don't manufacture tires, so it's completely out of our hands. The bottom line is this. If there are not enough tires in stock for every team to have three sets of tires, then we have to wait on supply and let it catch up."

The decision to cancel this year's event is not an emotional decision; it has been based on actual facts that are business-related and that every track, Series, and sanction, asphalt and dirt, has been dealing with all year. Based on Hoosier's tire production schedule, the time of year they will be released, and the other events already scheduled late in the year, the event just did not have a place to go.

"This decision did not come lightly. The track and the Series have worked for over a month now to see if we could rectify the tire issue in advance of the World Championship weekend. We have been in constant contact with Hoosier about the availability of the FASTRAK FT200 and FT400 tires and have not come up with enough tires for every competitor to have the same chance at getting tires. The FASTRAK World Championship has been our season-ending crown jewel for seven years, and it has been gaining the momentum in fan and competitor support that we have been working towards since the first World Championship at our speedway," commented Virginia Motor Speedway owner Bill Sawyer.

All efforts now will be on the 2022 FASTRAK World Championship and more. Some exciting news will be released in the coming weeks, including new tracks, new classes, new sponsors, and, more importantly, doubling the amount to win for the 2022 World Championship.

Race fans can go to www.vamotorspeedway.com to view the complete schedule Virginia Motor Speedway's 2021 season, find detailed event information, get the latest news, and get complete ticket and camping information. In addition, fans can get social with Virginia Motor Speedway by following @vamotorspeedway on Twitter, clicking "Like" at www.facebook.com/VaMotorSpeedway , and on www.youtube.com/VaMotorSpeedway.

ABOUT FASTRAK RACING - The FASTRAK Racing Series is currently in its eighteenth year and has been a fundamental force in developing drivers. The Series has offered some of the highest-paying points funds in Crate racing today. FASTRAK held its first-ever touring event on April 3, 2004, at Winder Barrow Speedway located in Winder, Georgia, and that was the first ever touring event held for Crate Late Models in the world! FASTRAK currently holds tour events in the Southeast