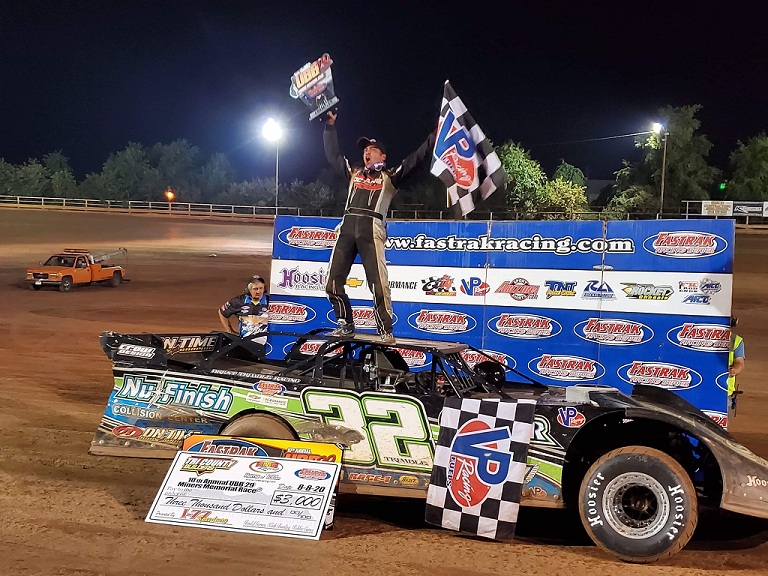 Ripley, West Virginia - "Hillbilly Hustler" Brent Trimble put himself in the FASTRAK Racing Series powered by Chevrolet Performance spotlight last Labor Day weekend 2019 when the Morgantown, WV native swept the "Hillbilly Hundred" weekend at Tyler County Speedway. Those events paid $2000 to win each. Saturday night at the I-77 Speedway Trimble claimed the biggest win so far in his career $3000 and the prestige of becoming the 6th different winner of the Upper Big Branch 29 Miners Memorial paying respect in Motorsports to the passing of those in 2010 in the West Virginia coal mines.

It was an absolutely packed house for the annual event for the 2nd consecutive year being held at the Ripley 3/8th mile clay gem nestled off Interstate 77. The evening would get underway with New York driver David Pangrazio in his FASTRAK debut weekend quickly get around to be fast qualifier. Pangrazio would then lock in the pole position after claiming the money dash victory and before the drop of the green flag he already pocketed over $500 as perks to this special show done yearly.

Heat races would go easily from the starting position to the defending FASTRAK national rookie of the year of 2019 Luke Hyre & current touring series point leader Layton Sullivan too.

After the special ceremonies performed in front of the massive audience with a 29 second moment of silence, racers prayers, acknowledgement of the fallen 29 miners by lifting lanterns into the beautiful skies. The field was set for the 50 lap A-Main feature to commence.

The race would start off quickly with David Pangrazio battling with Dillon Brown for the top position the opening laps. A total of four cautions would slow the event, one of them being a multi car incident in turn two.

The battle between the front runners would then shift with hopeful opportunities to take the lead for Trimble, Corey Almond, Matt Long & Kyle Thomas too. All within cat whiskers of pulling the race win.

However when the long green flag run gotten underway to the homestretch finish Trimble would clear around Pangrazio for the checkers at the end. Other notables like Brown would suffer handling falling back in the field. Corey Almond after having problems at Ohio Valley would take his welding radiator to a soild finish.

The race would conclude going to Trimble claiming the $3000 payday at I-77 for his 3rd career FASTRAK touring series victory.

The next event scheduled for the FASTRAK Racing Series powered by Chevrolet Performance will be on Saturday, August 29th with our inaugural visit to Lake View, SC Motor Speedway paying $2000 to win.