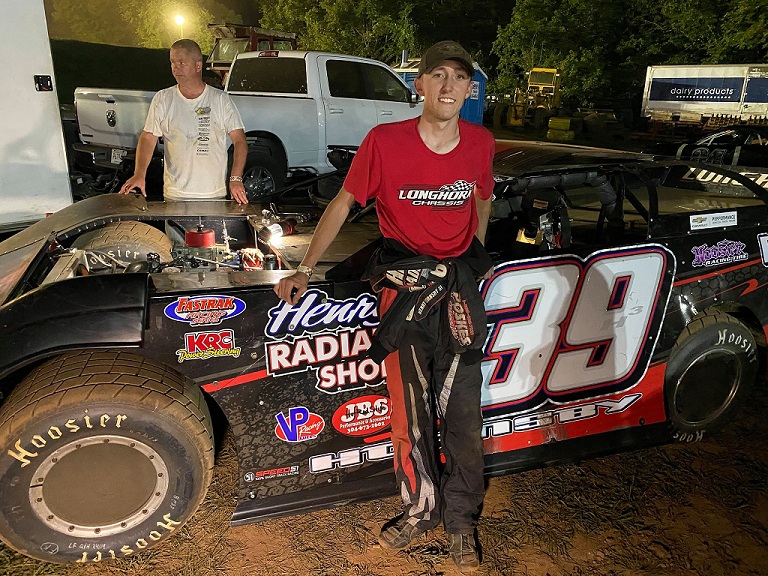 Lubeck, West Virginia - The "cliche" always follow you roots & never be against returning, happened for young driver Henry Hornsby III from Beckley, WV as his #39 Longhorn was the proverbial winner when the dust settled at the 3/8th mile Ohio Valley Speedway for the FASTRAK Racing Series powered by Chevrolet Performance inaugural visit to the clay gem at the West/Ohio state line in operation since 1958. The series making its debut featured 22 pro late model competitors from five states represented from New York to South Carolina in attendance.

The evening looked like it was going to be a "perfect swing" for the current points leader of the series Layton Sullivan, fast qualifier, heat one winner, set on the pole for the 40 lap $2000 to win Feature. It was looking to be his night & 2nd victory of the season in just three events for the 2020 crazy year. However that was short lived in the feature early on lap 3 after tangling up on a restart in turn one with Trey Watson. Fighting from the rear of the field at the checkered flag he would salvage a 8th place finish last car on the lead lap with Hornsby at his tail when the race concluded at Ohio Valley Speedway.

This mishap for Sullivan would give the opportunity for new faces to emerge. Matt Long 2nd in the points -8 back would have a decent night to begin an ascent to climb his way to the top spot of the scoring points pylon.

Brent Trimble, Kyle Thomas & Dillon Brown who have been successful FASTRAK contenders of the past, now moving into the super late models program have struggled this 2020 season but found a decent night with the reunion of their roots to pro late models at the Valley.

Another young sensation who cut his teeth in 2012 to 2016 in FASTRAK moving also into the world of super late models after years of success was Hornsby. Everything would simply fall into his favor on lap 3 allowing the opportunity to get around Brown by lap 10 taking the lead & never looking back as the Beckley, WV native would capture his 5th career FASTRAK touring victory between wins at Beckley, Princeton & now for the series first time visit to Ohio Valley.

This win also makes three different victors on the 2020 FASTRAK schedule currently this season as the rush continues to knock out as many races possible.

The next event scheduled for the FASTRAK Racing Series powered by Chevrolet Performance will be Saturday, August 8th will return to the I-77 Speedway in Ripley, WV for the 10th Annual Upper Big Branch 29 Miners Memorial Race paying $3000 to win.