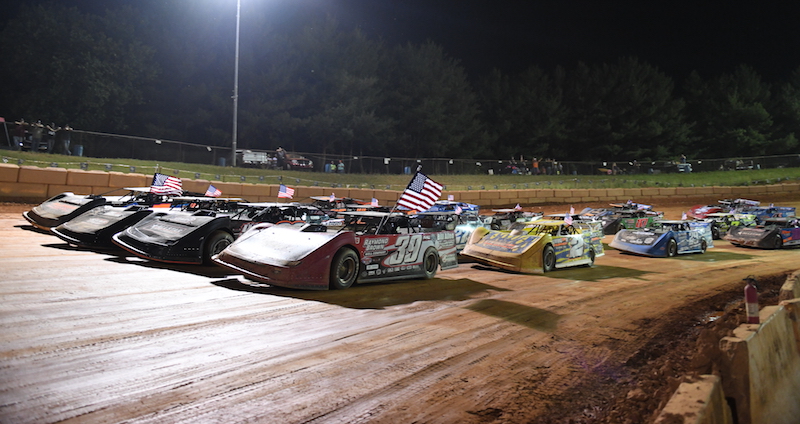 Carnesville, GA -- At Winder Barrow Speedway on April 3, 2004 the standard for Pro Late Model dirt racing was set. The FASTRAK Racing Series saw five entries in its first ever event and it’s one founder Stan Lester will never forget as FASTRAK heads into its 17th year in 2020.

“It was a late race restart, and we were double file all the way to end back then,” reminisced Lester, “those five guys went into turn one and all five of them piled up. The track owner asked me “well, what are you going to do?”, well of course, I had never run a race before so I had no idea. I took the mic from the announcer and said 'Attention on the race track, first one to the finish line wins!' You have never seen such a sight of those guys pushing their cars, all torn up towards the finish line just to say they won.”

By the end of the first season in 2004 the FASTRAK Racing Series had grown to see a car count of 51 at Oglethorpe Speedway Park. It was obvious that Lester had done what so many had doubted, he had proved that crate motors would work in dirt racing. In 2020,  FASTRAK will head into its 17th season, with sights set on continuing the success of the past 16.

In 2018 FASTRAK Companies International saw 778 different late model teams, across FASTRAK and ULTIMATE, compete in touring events and weekly sanctioned tracks. That number is staggering considering the company only sanctions two classes of late models. However, more classes are on the horizon. In 2019 the FASTRAK Future Stars Tour was conceptualized as a “teenage only” tour for 602 Late Models. This gives young drivers a natural progression from karting, legend cars, and bandoleros into a full-bodied dirt late model. Furthermore, this gives FASTRAK the unique opportunity to have a driver race within the organization from the age of 13 up until they retire from late model racing, perhaps at age 53, making them a potential 40-year customer.

“It is certainly an exciting time to be involved with FASTRAK Companies International,” said FASTRAK Vice President DJ Irvine, “2019 was a thrilling season, with an historic FASTRAK World Championship, the continued growth of both FASTRAK and ULTIMATE, and the birth of a brand new FASTRAK Future Stars Tour.”

FASTRAK Companies International has worked with member tracks to develop these “staple events” such as the FASTRAK World Championship. The company wants to build those traditions so that drivers and fans know that year after year the same events are returning to their local tracks. FASTRAK’s other staple events are the FASTRAK World Challenge, Triple Crown, UBB Miners Memorial and East Coast Rumble, which have become time-honored staples on the FASTRAK schedule. ULTIMATE’s slate of staple events includes Virginia Motor Speedway’s King of the Commonwealth and USA 100 along with Richmond Raceway’s Paul “Butterball” Wooldridge Memorial all touting a winner’s pay day of $20,000.

Not only has FASTRAK built lasting relationships with a number of race tracks, there have been several long-time sponsors over the past 16 years. Hoosier Racing Tire, Chevrolet Performance, Arizona Sports Shirts, TNT Race Cars, and VP Racing Fuels have been long supporters of FASTRAK. A host of new partners have emerged over the past few years including Simpson, AFCO, Speed51.com, KRC Power Steering, Dirt Track Bank, and DealergroupUSA.

“We have the best partners in the business,” continued Irvine. “They work alongside us to be able to offer up a great points fund and other programs to really help our drivers as well as our tracks. To date FASTRAK Companies International has paid out over $5.5 million in points money to teams. That certainly wouldn’t be possible without our great partners.”

FASTRAK’s focus has always been to help control the rising costs of dirt late model racing. That vision continues as in 2019 AFCO debuted their “Crate Spec Shock Series” after working hand-in-hand with FASTRAK over the course of 2018. The AFCO Crate Spec shocks saw instant success with Tim Byrd winning Volunteer Speedway’s track championship utilizing the $187 shocks. Byrd was competing against others with an open shock rule and stacked springs, neither of which he utilized.

Heading into its 17th season, FASTRAK is gaining more and more exposure after seeing the 2019 FASTRAK World Championship televised on Speed51’s Short Track America as a 2-hour special on MavTV. The 2020 FASTRAK World Championship along with more races are set to hit the airwaves on broadcast television. Furthermore, FASTRAK and ULTIMATE will both have more races live streamed as the company continues to evolve into the digital age.

FASTRAK Companies International has also enjoyed having employees continue with the company for several years, something that is rare in today’s world. Page Stephens worked for Stan at his farm and transitioned over to FASTRAK and had been with Stan for 18 years. Mary Kay Combes has been with FASTRAK since the beginning, marking 16 years. Long time official Jerry King has also been with FASTRAK for 12 years. Wesley Outland, the voice of the FASTRAK Racing Series, will mark his 11th year with the company in 2020. This year, FASTRAK will honor two ten-year employees at its annual Night of Champions Banquet; Kelley Carlton and Tommy Tedder. Kelley has served as the ULTIMATE Super Late Model Series director and Tommy has been the voice of the ULTIMATE Super Late Model Series. Currently, there are no employees of FASTRAK who have been with the company for less than three years.

“I am probably as proud of this as I am anything we have accomplished. I feel like we finally have the right team in place,” said Lester, “Coming into the 17th year I can truly say I am totally removing myself from the day to day and moving on to several other companies we have going on now. DJ will be running the day to day, Stephanie running the office, all of our Regional Directors are doing an excellent job, we cloud compute now, so everything is available to me from the internet. Even our accounting system is on the cloud. Plus, with Skype I am available to all of our people basically at any point and time from anywhere. Even our regular phone system is cloud based so when people call my direct office line, it can ring to my mobile phone. As you can see from all these long-term plans, I have been working towards this for a long time”.

Lester has been working on a patent for over 13 years now, that is finally coming to fruition along with developing several other projects continuing to innovate different business practices.

“This is fun time for me now. It has been a lot of fun, building this over the past 16 years,” said Lester, “And I am looking forward to seeing it grow into the future. We have some great tracks to work with, great promoters and great people in place to make our future plans to continue right along. I can’t wait to see what they do. The State of 604 late model seminar in Greenville this coming Saturday will be the last seminar I will personally be involved in, unless they sign me in by Skype or something if they need me. Otherwise, I have done my best, given it 150%, paid back over $5.5 million in point fund money over the years to grassroots racing, our bills are paid and it’s time for me to move on and get out of the way.”

FASTRAK RACING HEADED TO VIRGINIA MOTOR SPEEDWAY FOR $3,000 TO WIN KING OF THE COMMONWEALTH